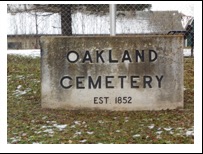 Watch this page for upcoming Oakland Cemetery Newsletters and Announcements.

CEMETERY CLEAN-UP ON SATURDAY, May 4TH

The Oakland Cemetery Association of Minnesota City will hold its twenty first annual spring clean-up on Saturday, May 4, 2018 from 8 AM to 11 AM. In case of inclement weather, it is possible (but not likely) that the work day would be rescheduled for the following Saturday on May 11th.

Plans for this workday include cutting up downed tree branches, trimming trees, mowing, trimming around stones and the fence, raking, brush cutting, fence repair, and generally cleaning up the cemetery. Please come ready to work and bring your tools such as rakes, shovels, pruning shears, weed eaters, etc.

The Oakland Cemetery has a new mailing address - PO Box 46 in Minnesota City MN 55959. Monetary donations are always appreciated to help defray the costs of maintaining and improving the cemetery. Lots are available at a cost of $600 each. To inquire, please send an email to mncityoakland@outlook.com or contact Lori Donehower at 507-689-4344 or 507-458-7111.

In an effort to make the Cemetery easier to mow and to look more attractively maintained, we have set up some guidelines for grave decorations. Plantings, shrubs, or decorations which inhibit mowing may be moved or removed. Any decorations or flower arrangements not removed will be picked up at our annual cemetery clean-up on May 5th at which time we will attempt to leave any spring or summer decorations that look to be in good shape and comply with the rules of the cemetery. Summer/fall decorations are to be removed by October 15th.

The Honor Guard of the Veterans of Foreign Wars will present at the Oakland Cemetery on Sunday, May 26th in the late afternoon.

Marvin Hunger has been serving as the Cemetery Board President and we would like to thank him for all his hard work and dedication. Hollis Donehower will be serving as the new Board President. We welcome Dallas & Corinne Denzer to the Board as new members. We are hoping to add more members to the Board and anyone who has an active interest in the cemetery is welcome. Please contact a current Board member for more information.