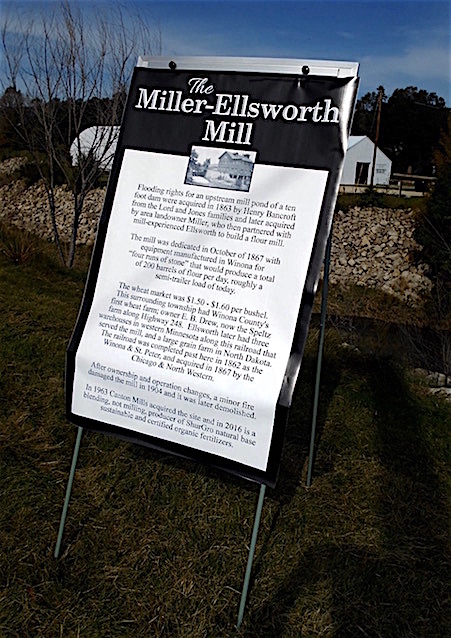 Flooding rights for an upstream mill pond of a ten foot dam were acquired in 1863 by Henry Bancroft from the Lord and Jones families and later acquired by area landowner Miller, who then partnered with mill-experienced Ellsworth to build a flour mill.

The mill was dedicated in October of 1867 with equipment manufactured in Winona for “four runs of stone” that would produce a total of 200 barrels of flour per day, roughly a semi-trailer load of today.

This surrounding township had Winona County’s first wheat farmed, owned by E.B. Drew, now the Speltz farm along Highway 248. The wheat market was $1.50-$1.60 per bushel. The railroad was completed past here in 1862 as the Winona and St. Peter and was acquired in 1867 by the Chicago and Northwestern. Ellsworth later had three warehouses in western Minnesota along this railroad that served the mill.

After ownership and operation changes, a minor fire damaged the mill in 1904 and it was later demolished.

“In 1963 Canton Mills feed and fertilizer operations were moved to the site from Canton, Mn. In 2017 it is a producer and distributor of ShurGro sustainable and organic products.